While much has been written about the experiential journey, one needs to experience it first hand to grasp its significance. 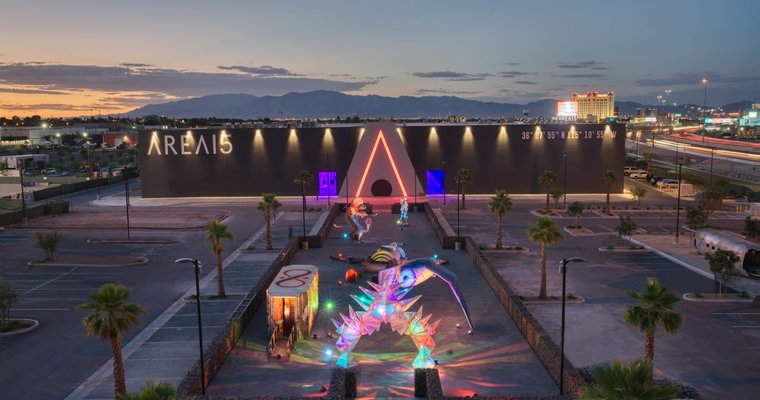 While much has been written about the experiential journey, one needs to experience it first hand to grasp its significance.

Upon arrival and drop-off at the site, the guests pass through an area of sculpture, check in, and then through the non-descript main door, passing through an illuminated entrance, and then greeted by a giant projection mapped skull!

Once inside, the warehouse space feels like a "mall of entertainment" — with live entertainment, hospitality, exhibitions and even retail on offer. This is an area that has been heavily themed with blacklight artwork, and a unique decoration continuing the vibe of the whole concept.

Immersive entertainment on display is divided between VR and AR applications. One of the oldest VR installations at Area 15 has been the "Birdly" flying VR platform from Somniacs. Two units of the immersive flying system were installed in their own enclosures on the main hall — with a CleanBox hygiene system in accompaniment.

The other VR experiences inside the space include the installation of the first "Oz Experience" from Backlight Studios. The company's free-roam PC backpack VR platform is housed in a unique venue.

At the time of visiting there was also a pop-up VR installation on the mezzanine deck using Meta Quest2 VR headsets offering a temporary artainment attraction, "Van Gogh VR."

Regarding AR, there was the "BrainStorm" mind-reading installation. Along with the main augmented attraction, "Particle Quest" — using AR viewers, the guests take part on a venue-wide Easter egg hunt for clues to ascertain the secret backstory of the venue.

One of the biggest elements of the immersion of the site, developed in partnership with Meow Wolf, is the "Mega Mart" — designed and developed by the former art collective and multi-media production company. A mixture of interactive experiences, art installations and funhouse.

The experience has proven one of the hits of the site — with guests traversing through an imitation superstore with fake products and a hidden story of capitalism and excess at its core, betraying Meow Wolf's art commune roots and supported by an extensive merchandise store.

This art installation is accompanied with several other gallery and installation style examples. These range from "Museum Fiasco" — offering immersive light and sound installations; "Wink World: Portal into the Infinite" — offering an exhibit crossing between a funhouse with mirror rooms and jump scares, developed by one of the co-founders of the Blue Man Group.

All this is supported by a physical attraction, added to the inside ceiling of the venue, with the "Haley's Comet" dueling zip line.

Retro bar-arcade chain "Emporium" was one of the first retail offerings to open, with its mix of amusement and cocktails. Down the aisles chain "Dueling Axes" has taken residency, supported by the sports simulator chain "Five Iron Golf."

Meanwhile, a rum tasting installation, "Lost Spirits Distillery," rounds off the populated units of Area 15. There is a main open space with its own bar area, and private hire space, but that fundamentally covers the eclectic population of the flagship site.

A plan and a focus

Some have labelled this the "spaghetti against the wall" approach (throwing a bowl of ideas at the wall and seeing what sticks), but the operators of Area 15 have a very clear business plan on what they need to generate from each unit to reach peak performance.

A lot of the concept is still being defined since its opening, and to work out the kinks in the model. The operation recently activated an unlimited access "Experience Pass" ticketing package, addressing some of the price gouging complaints of the individual elements of the site — while still avoiding on-the-door ticketing.

The district that includes the Area 15 warehouse has been developed as not just a facility location, but also to act as a "hub," attracting other entertainment and hospitality offerings. This included a surprise installation of the Netflix-supported "Army of the Dead: Viva Vengeance" virtual reality attraction.

The surrounding hub space, "Speed of Dark," has been revealed as an original live immersive experience, developed by Particle Ink. Situated in a space called the Lighthouse, the experience will comprise live actors and MR-based effects within the space with audiences taken through a narrative they can explore. This space outside also includes the "Liftoff" panoramic cocktail experience.

The Area 15 location itself also saw the opening of the second Illuminarium venue. Housed in a purpose-built venue, this will be a flagship location for the immersive experience venue, offering a projection environment incorporating beamform audio, vibrating floors and olfactory elements as the guests traverse the 45-minute experiences. Illuminarium's new Las Vegas site will house three new immersive film productions, revealed by Blooloop as being "Wild: A Safari Experience," "Space: A Journey to the Moon & Beyond" and "O'Keeffe: One Hundred Flowers."

The facility announced that it would be launching its own NFT collectable playing cards — which will be minted on the Polygon blockchain. Under the "On The Decks" brand, these one-of-a-kind digital NTF collectables include branding artwork that reflects the venue and location and hope to be a successful entry into crypto collectables linked to the facility business.

As for the future, Fisher Brothers, the owner, plans to open a second version in Orlando, Florida, with a 300,000-square-foot venue, comprising 20 attractions that will include retail space, all scheduled to open in 2024.

(Editor's note: Extracts from this blog are from recent coverage in The Stinger Report, published by Spider Entertainment and its director, Kevin Williams, the leading interactive out-of-home entertainment news service covering the immersive frontier and beyond.)

Along with advisory positions with other entrants into the market he is founder and publisher of the Stinger Report, “a-must-read” e-zine for those working or investing in the amusement, attractions and entertainment industry. He is a prolific writer and provides regular news columns for main trade publications. He also travels the globe as a keynote speaker, moderator and panelist at numerous industry conferences and events. Author of “The Out-of-Home Immersive Entertainment Frontier: Expanding Interactive Boundaries in Leisure Facilities,” the only book on this aspect of the market, with the second edition scheduled for a 2023 release.

Why retailers must focus on customer journey to optimize digital experiences

What's ahead for the retail ATM